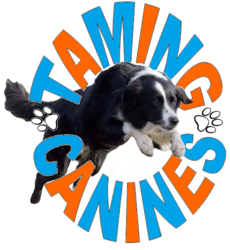 Putting the FUN back into YOUR training!The home of Agility and Hoopers training specifically aimed at all levels of Distance Handling 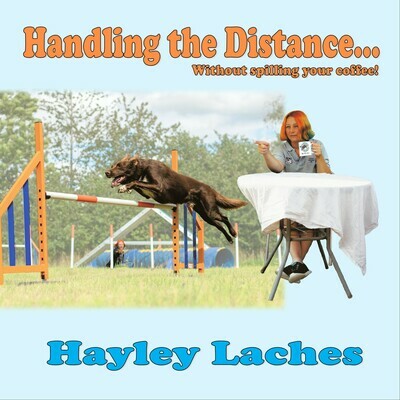 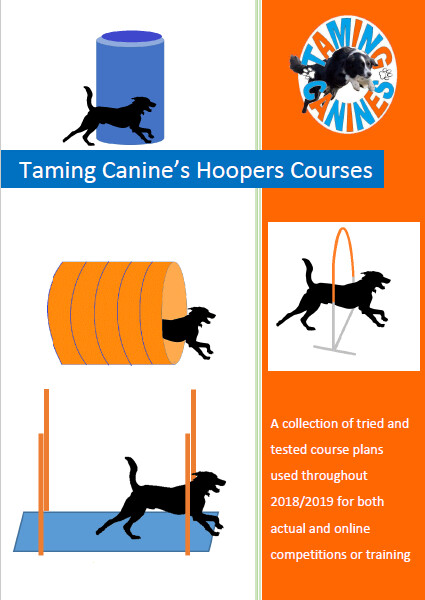 Taming Canines is a modern dog training centre that provides top notch training in a variety of subjects. We offer both private and small group sessions, so you can choose exactly the training style you like best.

Our training centre is distinguished by the high level of service and support we provide to our owners, deep knowledge of modern force-free dog training and behaviour, all levels of agility and hoopers, a unique understanding of distance handling for dog sports, and most importantly, the high calibre of our trainers.

So whether you're having trouble with your dog not coming back when you call them, or they're over excitable and boisterous at home or in public. Maybe they had a traumatic experience and are displaying aggression or behavioural issues or you simply want to give your dog the best start in their life with you. At Taming Canines, we'll help you cement your relationship with your best friend so they choose to stay with and interact with you.

Whether its Agility, Hoopers, Behavioural consults, Lifeskills or basic training we can help you!

I came to her initially with my collie after many trainers gave up due to her racing me and pole knocking which also resulted in a huge drop in my own confidence with her. Firstly - Hayley doesn’t give up! It doesn’t compute! 😁

Distance handling has taught Molly to to really think for herself about what she is doing meaning poles are staying up more and more as she’s not racing me.

Hayley’s knowledge, patience and encouragement with the both of us has been out of this world. She has fully supported us every step of the way to ensure we are both enjoying ourselves again.

We have also attended Hayley’s camps and shows. The atmosphere is always amazing, everybody looks after each other! We have such a laugh and come away having learned so, so much. Hayley really knows her stuff and adapts extremely well based on each handler and dog combination as well as their handling style.

I have also recently put my new knowledge into my youngster. Her independence and abilities are already amazing thanks to Hayley’s foundations. 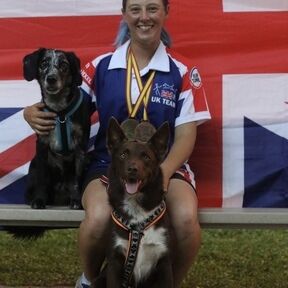 Taming Canines is run by founding trainer Hayley Laches, having worked as a Canine Carer within the national charity DogsTrust, she worked with a large number of dogs with varying, complex and often multiple behavioural issues. She became a qualified instructor over 10 years ago having trained intensively with The British Institute of Professional Dog Trainers and has committed herself to continued professional development and invested a great deal into her continued learning and staying at the fore of her field. She predominantly uses both BAT training techniques alongside the CARE protocol, although she works with every dog on an individual basis as there is no one size that fits all and prides herself on finding an ‘outside the box’ solution to even the most complex of challenges.

Hayley is an Adv.ACHUKI (Advanced Accredited Instructor) and Judge for Canine Hoopers UK, as well as being a certified Kennel Club Agility Judge. She is amongst the highest level of competitive handler in the UK in both sports, running in Championship Agility classes and remains one of the highest ranked handlers nationally under Canine Hoopers UK. During 2019 Hayley also competed internationally on two separate occasions, returning with both a gold and a bronze medal from her second time abroad.

With a firm belief that there is no one size fits all approach to training, and that it is intuitive and cannot be taken from text book to real life without adaptation and application, Hayley has proven her methods with many different breeds, from her own competition dogs including her Australian Kelpie, Husky, Flat Coat Retriever and Spaniel mixes, she has also helped an even wider variety of breeds including sighthounds, gundogs, collies, toy breeds and rare breeds including Xoloitzcuintle.

Hayley travels the UK teaching both distance handling and Hoopers to other dog training clubs and through individual workshops, either under the Taming Canines banner or as an external consultant for others, such as Canine Hoopers UK, the UK's leading organisation for Hoopers where she teaches their Accredited Instructors Courses, helping other clubs to bring Hoopers to people in their own area.

Taming Canines has access to other guest trainers and instructors who compliment the modern, force free, training style that we promote, allowing us to offer a diverse range of regular training sessions, workshops, training days and training camps to encompass all abilities and objectives.

We travel the UK delivering workshops and training camps as a guest trainer.

When we aren't travelling, we are based in Spalding, Lincolnshire.